We use cookies on our website. They help us get to know you a little and how you use our website. This helps us provide a more valuable and tailored experience for you and others.

You can revoke cookies at anytime at the bottom of the page.

Wednesday, July 26, 2017 — Pianist George Li celebrates his newly-signed exclusive Warner Classics contract with his recording debut, the solo recital Live at the Mariinsky. The young American, winner of the silver medal at the International Tchaikovsky Competition in Moscow in 2015, offers an enthralling program of Haydn, Chopin, Rachmaninov and Liszt. It was recorded live at the Mariinsky Concert Hall in that other great Russian city, St Petersburg, in October 2016.

George Li’s artistry captured the musical world’s attention at the Tchaikovsky Competition, one of the most formidable events of its kind. He describes it as being “like the musical Olympics”, but also found that “being there in Moscow was a sublime feeling”. His talent and dedication duly prevailed. As Pianist magazine has written: “His musicianship is informed by a fulsome emotional world, sensitivity to drama, directness of expression and distinctive beauty of tone that together conspire to give him a strong personal voice at the instrument.”

"Li’s performance left no doubt that he combines staggering technical prowess, a sense of command and depth of expression."

Li, now 21 years old, was born in Boston to music-loving parents who came to the USA from China. He started taking part in music competitions as a child and experienced something of an epiphany when, as a young teenager, he performed a Beethoven concerto with orchestra. As he told Pianist magazine: “All of a sudden I felt like I had entered a different world … It was a unique and amazing experience: for the first time I was feeling music a lot more emotionally, rather than just remembering the right notes and where to come in. Afterwards people were coming up to me and saying that listening to me had changed their lives. I was shocked. I didn’t know before that music had that kind of power. After that, I just wanted to be able to find that feeling again.”

Among his piano idols, he cites Horowitz, Cortot, Gilels, Richter and Argerich, while his mentors include the distinguished husband-and-wife team of Russell Sherman and Wha Kyung Byun, who both teach at the New England Conservatory. Over the years he has won a number of competitions around the world, among them the 2010 Young Concert Artists International Auditions, which enabled him to start building a structured career. In 2012 he received the Gilmore Young Artist Award, which in 2016 was followed by the equally prestigious Avery Fisher Career Grant. Another major accolade came in 2011, when he was invited to play at the White House on the occasion of a state dinner that President Obama hosted for the German Chancellor, Angela Merkel.

Now George juggles a busy international performing career and piano studies with a literature course at Harvard University in his hometown of Boston.  “Literature helps me understand music because they’re so interrelated in understanding all aspects of humanity,” he told the Harvard Gazette. “With music, there’s a balancing of different qualities and you have to exercise control and finesse and technique. There’s always a fine line between too much control and technique and being overly emotional, overindulgent. [Writers are] able to convey such great emotions, and that’s what I’m trying to achieve … I’m trying to reinterpret what the composer has written, but, in a way, I’m creating a new kind of interpretation of the music.”

With words as well as music holding such an important place in his life, it becomes clear why George Li chooses to see the program for his Mariinsky recital in terms of a narrative. He describes its trajectory as being “like a journey down to Hell and back up again.”

The recital starts with Haydn’s Sonata in B minor, Hob.XVI:32. “Haydn is known for his humor,” says Li, “but here it is juxtaposed with a certain sadness, which is unusual in his music.” The sadness becomes explicit in the next work, Chopin’s Piano Sonata No. 2 in B flat minor, which takes its name from its solemn, but celebrated third movement, the ‘Funeral March’. “The sonata is one of Chopin’s most intense and dramatic pieces. The Funeral March is followed by a Presto finale. In it I hear the wind blowing through a graveyard … ghosts talking to each other.” The pianist stays in what he calls “the realm of darkness” for Rachmaninov’s Variations on a Theme of Corelli. Dating from 1931, and growing from the haunting melody known as ‘La folia’, it is the composer’s last work for solo piano. Within this dark world, Rachmaninov experiments with layers of sound and color. “A special moment comes in the middle,” explains Li, “when it goes into a major key for the first time … Vladimir Ashkenazy has described it as an island of serenity surrounded by an ocean of darkness. The final section, the coda, starts off powerfully, in dark triumph, but unexpectedly makes the transition to a heart-wrenching swansong. Finally, it subsides into silence. We have been through death and tragedy, but in the end there’s a promise of resurrection.” Comfort arrives with the next piece, Liszt’s exquisitely touching Consolation No. 3, which is followed by unbridled celebration in the form of another piece by Liszt, the boisterous, virtuosic Hungarian Rhapsody No 2.

When, two months before his Mariinsky recital, George Li performed the same technically and emotionally demanding programme at the Edinburgh Festival, The Herald wrote: “As anyone present in the Queen’s Hall yesterday for the sensational concert given by Bostonian pianist George Li will tell you, no piano recital ever more deserved five stars.  [Li has] masses of style, acres of expertise and technical virtuosity with dexterity almost beyond categorization … I’ve seldom felt a crowd being so swept along by the momentum of an event; and they roared for more.” 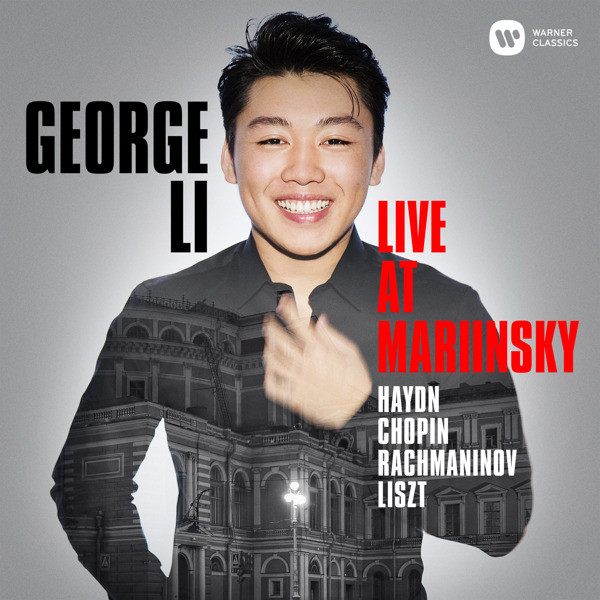 Unison Media is committed to exploring new ways to present and promote music and those who create and perform it.